Satellite images of penguin poop in Antarctica have revealed a number of Emperor penguin colonies living and breeding on the icy continent that scientists weren’t previously aware of.

Eight completely new communities have now been found in some of the most remote and inaccessible parts of Antarctica, and three additional colonies that were previously identified on the ground have also been confirmed from space.

In total, we now know of 61 current breeding locations for the largest penguin on Earth (Aptenodytes forsteri), a 20 percent increase from before. 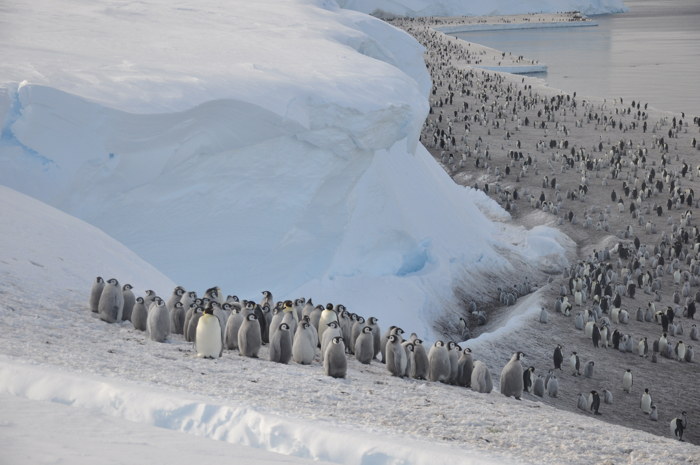 This seemingly good news, however, hides a sinking truth: these populations reside on the precipice of a slowly-disappearing habitat. Most of the new colonies are already so small, scientists needed multiple, high-resolution images from above to make sure their guano stains, or droppings, were actually there.

In the end, their numbers increased the overall population of emperor penguins by just five to 10 percent.

It gets worse. Many of these colonies have been forced to the edges of their breeding grounds, which are highly vulnerable to climate change.

Comparison with recent modelling suggests that, if we continue going the way we’re going now, every single one of these newly identified colonies is expected to become extinct or quasi-extinct by the end of the century.

“Whilst it’s good news that we’ve found these new colonies, the breeding sites are all in locations where recent model projections suggest emperors will decline,” says conservation biologist Phil Trathan from the British Antarctic Survey (BAS).

“Birds in these sites are therefore probably the ‘canaries in the coalmine’ – we need to watch these sites carefully as climate change will affect this region.”

The size of penguin communities has a direct impact on their survival. Emperor penguins huddle around each other to stave off cold winds and hypothermia. So the smaller their colonies get, the more at-risk they become, especially during egg incubation when temperatures can drop below 40 degrees Celsius (104 degrees Fahrenheit).

Each year, when emperor penguins are ready to breed, they return to the same discrete location and huddle for protection.

To lay their eggs, hatch them, and raise their chicks, emperor penguins require stable ice that lasts for roughly nine months. But rising temperatures and melting ice has left parenting birds and the next generation in a dire situation.

Breeding failure could very well drive the demise of this species. For some colonies, the loss of these precious lands has already proved extremely deadly.

Scientists can’t be sure all the places they’ve identified from space are actually breeding grounds, but judging by the fact that these sites are persistent throughout the breeding season, and across multiple years, it seems likely they are.

Most studies to date have found that under a business-as-usual scenario, where greenhouse gases are released at the same rate, Antarctic sea ice will decrease by nearly half, and that means a huge percentage of the emperor penguin population will be lost by 2100.

Last year, a study on all known emperor penguins predicted 80 percent of the colonies would shrink by more than 90 percent come the end of the century.

Now that we know there are more penguins in vulnerable locations, the future for this species appears even worse.

It’s not just emperor penguins that face a grim future, though. Adélie penguins in Antarctica are dying in droves from extreme climatic anomalies as well.

These flightless birds are on thin ice.

The study was published in Remote Sensing in Ecology and Conservation.

Reduce Your iPhone Data Usage With These Helpful Hints